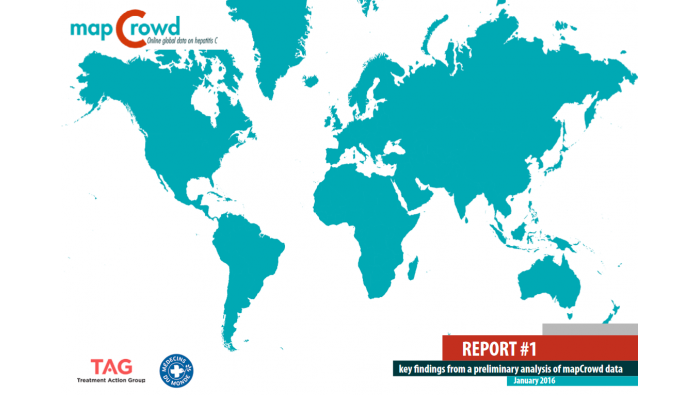 mapCrowd connects contributors and users from around the world, to share and enhance valuable information. HCV experts and advocates who join mapCrowd will enhance this international HCV advocacy network and shed light on current conditions in countries not yet included. mapCrowd will continually incorporate data from new countries and provide a regular stream of updates to reflect the latest developments in the global HCV epidemic.

The price of a basic HCV diagnostic package consists of laboratory HCV antibody testing, confirmatory viral load testing, genotyping, and liver fibrosis assessment by transient elastography (known as Fibroscan). The price of this package (say what this is---antibody, confirmatory viral load—anything else??) varies considerably across mapCrowd countries, ranging from US$67 in Brazil to US$627 in the United States. Access remains largely out of reach for those in low- and lower-middle income countries, where the diagnostic package is priced at up to 500% of the monthly gross national income (GNI) per capita.

Access to both pegylated interferon (PEG-IFN)-based and interferon-free HCV treatment with direct-acting antivirals (DAAs) is severely limited due to excessively high prices. Only 8 of the 23 countries studied have access to interferon-free treatment, which is priced several times higher than the monthly per capita GNI. Prices for HCV treatment vary widely across countries, reflecting different pharmaceutical marketing strategies. In Myanmar, Kenya and Côte d’Ivoire, where interferon-free treatment combinations are not available, a 48-week course of PEG-IFN is priced at 80 to 100 times the monthly GNI per capita.

Before they can be sold, medicines must be registered by national regulatory authorities.Pharmaceutical companies prioritize drug registration in high-income markets, and often delay it in less lucrative markets.

Failure to register drugs creates an additional barrier to treatment access—especially in countries with smaller, less prosperous economies. In our study, Canada, France, and the United States were the only countries where all interferon-free DAA treatment combinations are registered. In most low-income countries, there is a “registration gap” although originator companies offer voluntary licensing agreements that appear to expand access, they fail to register their DAAs.

Worldwide, few countries have established national HCV policies, illustrating low levels of awareness or political will to tackle the epidemic. Of the 119 countries where information exists, only 44 (or 37%) have national HCV plans. Where these policies do exist, most fail to include HCV prevention, diagnostic, and treatment access strategies for people who inject drugs, despite the high burden of HCV in this population.