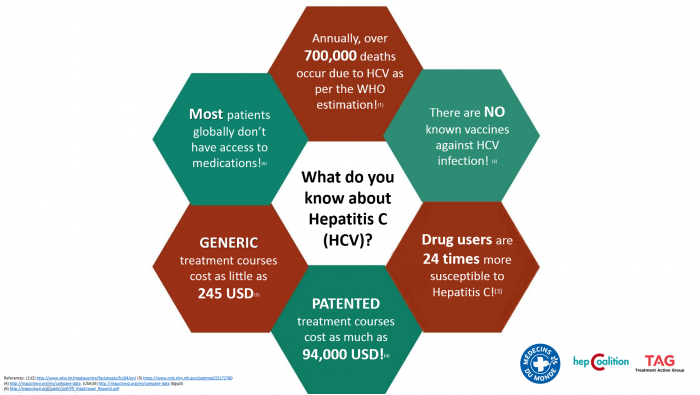 Global HCV Epidemiology Currently, there are an estimated 80 million people living with chronic HCV globally and millions are newly infected every year. The World Health Organization attributes an estimated 700,000 deaths to the hepatitis C Virus (HCV).

Prevention There are no vaccines for HCV, unlike hepatitis A and B. New HCV vaccines such as DNA (deoxyribonucleic acid) and vector- based, recombinant proteins and peptide-based vaccines are currently in phase I and II human clinical trials. Other interventions are, however, effective to prevent HCV transmission, such as harm reduction programs for injecting drug users, as well as other substance users.

Risk Factors Globally, out of the 16 million people who inject drugs, 67% are potentially positive, which can be attributed to use of shared, unsterilized injecting equipment. Those who inject drugs are known to have the highest risk of contracting HCV with the lowest access to prevention and treatment services (only around 2% of this population are treated per year). Unsterilized medical and tattooing equipment, unscreened blood transfusions, unsterile medical or dental procedures (eg. dialysis, dental implants) are some of the major risk factors. Vertical mother-to-child transmission and unprotected sex (particularly amongst HIV-positive men who have sex with men), also carry a risk of HCV transmission.

Direct-acting Antivirals Launched in 2013, combination regimens of direct-acting antivirals (DAAs) have proven to achieve over 95% sustained virologic response during a 12-week treatment regimen. According to mapCrowd data, in high-income countries, the list price for a patented treatment course can cost as much as 94,000 USD, in the absence of generics.

Generic treatment course Generics are bioequivalent treatments and provide effective competition to pricing. When generics are available, such as the combination regimen of sofosbuvir-ledipasvir in Egypt, a treatment course can cost as little as 245 USD. Generic DAAs must also meet safety and quality standards in a country and achieve the same sustained virologic responses, as patented treatments. Provisions in national laws and international agreements, such as compulsory licenses and patent oppositions, are options that enable a country to generically produce patented DAAs, which can increase patients’ access to the hepatitis C cure.

Access-related Barriers High prices remain one of the most significant issues globally, ultimately leading to restrictive policies that block the availability, prescription, and insurance coverage for the latest DAAs. Greater political will to lift the pricing barriers, eliminate treatment restrictions, fund harm reduction and public health strategies, particularly for key populations such as people who use drugs, is needed to make progress in eliminating hepatitis C by 2030.