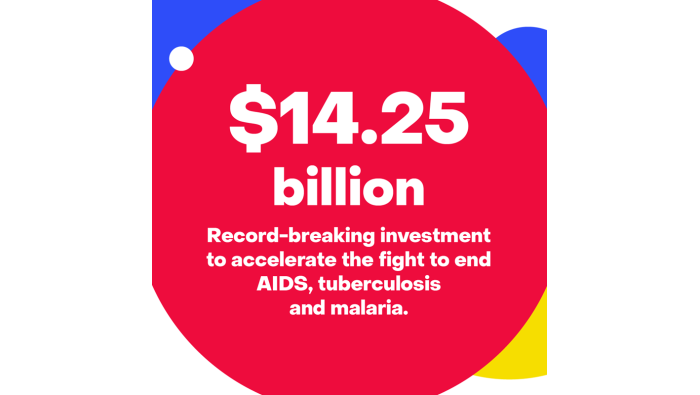 NEW YORK / GENEVA, 21 September 2022 - The United States of America-hosted pledging conference for the Global Fund to Fight AIDS, Tuberculosis and Malaria raised more than US$14.25 billion so far for the partnership’s work over the next three years. The conference in the margins of the UN General Assembly brought together more than 45 countries (including 18 Heads of State and Government), multilateral partners, private sector companies and civil society and community organizations. This support aims to save 20 million lives, avert 450 million new infections, and bring new hope for ending AIDS, TB and malaria. This investment will also strengthen health and community systems to leave no one behind and be resilient to future shocks.

Today marks the culmination of a successful campaign that started in February at the Preparatory Meeting co-hosted by the Democratic Republic of the Congo, Republic of Kenya, Republic of Rwanda, Republic of Senegal and Republic of South Africa. All five countries have a long history of being strategic partners of the Global Fund, as both implementers and donors.

“At a moment when the world is confronted by acute economic and political challenges and climate-driven disasters, President Joe Biden delivered an unparalleled mobilization of resources for global health,” said Peter Sands, Executive Director of the Global Fund. “We are extremely grateful for the generosity of everyone who has committed to support our partnership. With the intersection of so many global crises, our donors understand that it is more important than ever to stop these deadly diseases and protect everyone, regardless of who they are or where they live, from these and future health threats.”

Earlier this year, the United States committed to contribute US$6 billion over the next three years, a 30% increase over the last Replenishment, in line with the Global Fund Investment Case. Several other long-term public donors increased their pledges by 30%: Canada pledged CA$1.21 billion; the European Commission pledged €715 million; Federal Republic of Germany pledged €1.3 billion; and Japan pledged up to US$1.08 billion. Republic of France also significantly increased their pledge to nearly €1.6 billion. The United Kingdom, currently the Global Fund’s third largest donor, and Republic of Italy restated their support for the crucial work of the Global Fund and committed to pledge in the coming weeks. In the Sixth Replenishment they pledged US$1.7 billion and US$178 million, respectively.

With more than US$1.23 billion raised from private donors, the private sector has hit a new record of funding committed to the Global Fund. Led by a 20% increase from the Bill & Melinda Gates Foundation and with (RED)’s pledge of US$150 million, another 19 organizations and long-standing partners like the Children’s Investment Fund Foundation and the Rockefeller Foundation, as well as new and returning ones such as Johnson & Johnson and Anglo American, pledged this unprecedented total. Along with further support from vital non-financial resources and innovative finance co-investment commitments, this extraordinary level of support is a true demonstration of the power of partnership.

Twenty implementing partner countries – 18 from the African continent – also pledged their support, with a significant number increasing their pledges and a few new donors pledging for the first time, such as Indonesia with a pledge of US$10 million. Implementing country leaders also emphasized the importance of sustaining and increasing domestic investments in health, a critical commitment to the achievement of the Global Fund partnership’s mission.

Dr. Donald Kaberuka, the Chair of the Global Fund Board, opened the conference by saying,

“The world has demonstrated that HIV, malaria and TB can be conquered by science, leadership and a critical mass of resources. We have reason to celebrate. But the job is not yet done. COVID-19 has been a setback, a critical setback, but we must continue to aim for 2030 elimination.

This is the time to double down.”

The Global Fund partnership is a proven mechanism for maximizing impact. Health programs supported by the Global Fund have saved more than 50 million lives since its inception in 2002, and have provided prevention, treatment and care services to hundreds of millions of people.

“The Global Fund’s success is rooted in its partnership, made up of governments, international agencies, private companies, civil society and community organizations working together, all at the table, and a vital part of the Global Fund’s governance,” said Lady Roslyn Morauta, Vice-Chair of the Global Fund Board. “But what sets it apart from other global health initiatives is its commitment to put communities at the center and advance health equity by removing human rights and gender-related barriers.”

“For 20 years, the Global Fund has been one of the most important investments the world has made in global health,” said Bill Gates, co-chair of the Bill & Melinda Gates Foundation. “Through this record-setting Replenishment, the Global Fund and its partners will save millions of lives and build sustainable health systems that can prevent future pandemics.”

“We have 50 million reasons to celebrate the 50 million lives of people saved by the Global Fund partnership. Each has a story of hope and a story we should fight to keep alive, and today we have 20 million more we can bring hope to,” said Hourcade-Bellocq.

President Biden’s remarks, as he closed the conference, embodied a spirit of compassion and commitment to work across borders and find solutions to significant global challenges, like ending AIDS, TB and malaria as epidemics.