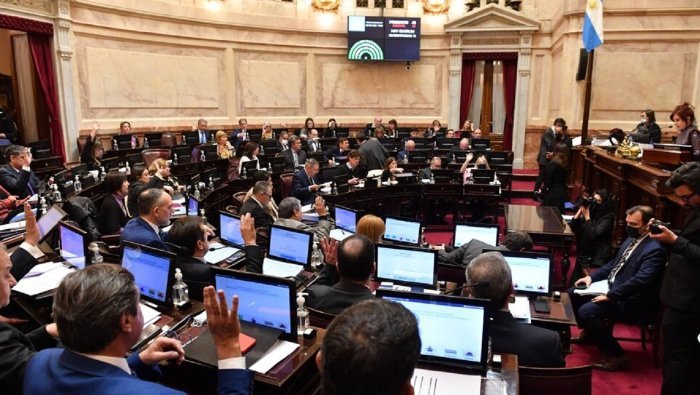 Activists and medics in Argentina have celebrated the passing of a progressive new HIV law that will combat discrimination, improve access to drugs, and promote national drug production. The law, which encompasses other sexually transmitted infections, viral hepatitis and tuberculosis, also tackles employment discrimination and implements new welfare provisions for patients.

The nation’s senators approved the law with a 60-to-one majority on June 30, 2022. Activists clutching flags and placards applauded and hugged each other on the balconies of the senate as the results were announced. Developed jointly with a broad coalition of civil society organisations and people who live with HIV, the law has been praised for its human rights and gender perspective and for adopting a holistic approach to health. Argentina’s previous HIV law was a more narrowly medical text passed in 1990, and had become outdated in the face of new developments in treatments. The new law had made it onto the congressional agenda three times previously, but was not adopted.

“Biomedical responses alone won’t end AIDS by 2030”, said Matías Muñoz, a lawyer and activist with the HIV-focused community advocacy group Asociación Ciclo Positivo (Positive Cycle Association). He highlighted that many Argentines who have HIV are faced with the interlinked problems of poverty and stigma. “States and societies need to understand that living with HIV isn’t just a physical or medical situation: it’s a political one.” In Argentina, an estimated 140 000 people have HIV, of whom 17% are not aware that they have it, according to the Argentinian Ministry of Health’s December 2021 HIV and STI response bulletin.

Previous legislation already stipulated that treatment for HIV must be free throughout the health-care system, including the public, social security, and private insurance systems. However, the new law incorporates viral hepatitis, tuberculosis, and sexually transmitted infections, and also closes some problematic loopholes. Pre-exposure prophylaxis (PrEP) was not covered because it did not exist when the 1990 law was developed, meaning that health-care providers have typically charged patients a proportion of the price, according to Leandro Cahn, Executive Director of Fundación Huésped, a non-profit organisation working on HIV, sexual health, and reproductive rights. Moreover, the wording was incompatible with newer technologies such as home testing.

HIV testing in pre-employment health screening is strictly banned under the new law. A resolution adopted in 2015 had made it possible to report this practice to the authorities, but had not strictly forbidden it, and it remains a major form of discrimination against people with HIV in the workplace. “They would incorporate [the test] without saying anything to the person, and then they wouldn’t take them, but they wouldn’t tell them why”, said Mabel Bianco, President of Fundación para Educación e Investigación de la Mujer, a non-profit organisation for reproductive health. “They don’t let them work, but they don’t start treatment if they aren’t told. It’s a double prejudice.”

In Argentina, some people have faced legal action on charges such as propagating disease after transmitting HIV to their partners. The law explicitly prevents people from being criminalised because they live with HIV, hepatitis, other sexually transmitted infections, or tuberculosis, and this should prevent similar cases in future, Cahn said.

The new law also means that people with HIV and hepatitis B or C will be allowed to retire if they are aged 50 years or older, have made at least 20 years of pensions contributions, have been living with their condition for 10 years or more and are not in formal employment. It also establishes a welfare payment equivalent to 70% of the monthly minimum wage to adults living with HIV or hepatitis B or C.

The law declares that researching public sector production of drugs and other medical supplies is in the national public interest. “We have medicine production laboratories in different provinces that, with investment and modernisation, could be producing these drugs and reducing the costs”, said Bianco. “To take an example from a different field, there’s a laboratory in Santa Fe province that’s producing misoprostol now, and that’s cheaper than if we buy and import it.”

Although such public production guarantees could open the door to drugs not currently available in Argentina being made available via mechanisms such as compulsory licensing, hurdles including patents will remain, and would need to be addressed with legislation, according to Cahn.

“It’s not like tomorrow, any public laboratory can start to produce any antiviral medication; it’s much more complex”, Cahn said. “But there are products and medical supplies that we could potentially look at collaborating with public laboratories to produce.”